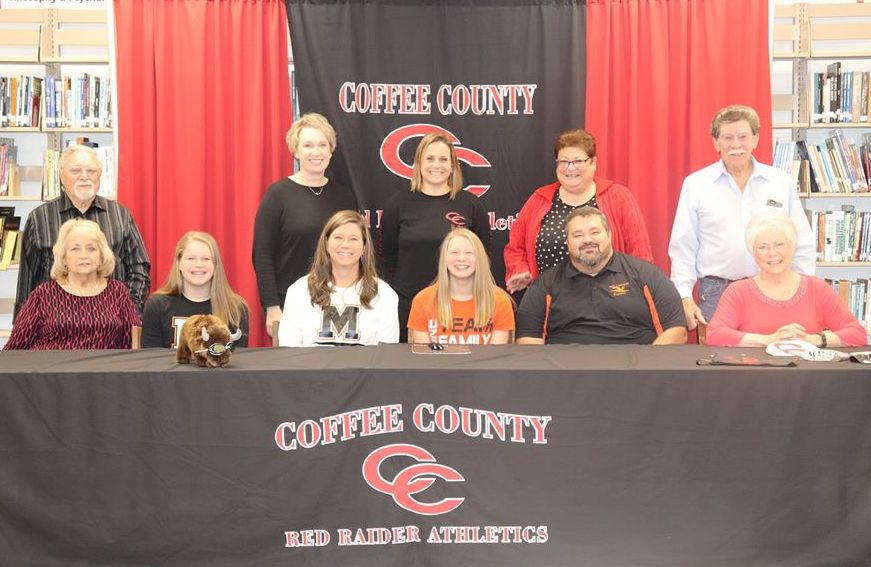 Coffee County CHS swimmer Kaylee Williams has made her decision official to compete collegiately at Milligan College.  Williams signed her paperwork on Monday to join the Lady Buffalo swim team in a ceremony at CHS.  Milligan is located in Milligan College, TN between Johnson City and Elizabethton.  Milligan College athletic teams are part of the National Association of Intercollegiate Athletics (NAIA), primarily competing in the Appalachian Athletic Conference.

Coach Becky Behrendorff of Coffee County praised Kaylee for her strong work ethic and willing leadership.  “Not having an assistant coach, Kaylee has helped me out by serving as a peer coach demonstrating and monitoring different events in practice.”   Behrendorff, herself a former college swimmer, believes that Kaylee has the drive to survive the tough transition to college swimming.  “Her parents have provided her great stability and support that will help her at the college level” added Behrendorff.  She also praised Kaylee for her academic work “Kaylee is very smart and that will really help her in juggling the classwork and swimming” said Behrendorff.

Kaylee plans to major in Occupational Therapy while at Milligan.  “I loved the campus and the community up there.  It also helped that it is a Christian college” said Williams.  Kaylee likes the coach at Milligan, Spencer Scarth, and the way he communicates with the team.  Williams expects to compete primarily in the breaststroke and individual medley(IM) at Milligan.  Kaylee has already posted qualifying times for the regional and state swim meets which marks an appearance in the state meet for all 4 years of her high school career.  In addition to swimming with the Coffee County High School swim team, Kaylee also competes in the offseason with the Manchester Makos.  While swimming with the Makos, Williams has qualified for regional, state and sectional meets.   Kaylee is the daughter of Phillip and Tera Williams.