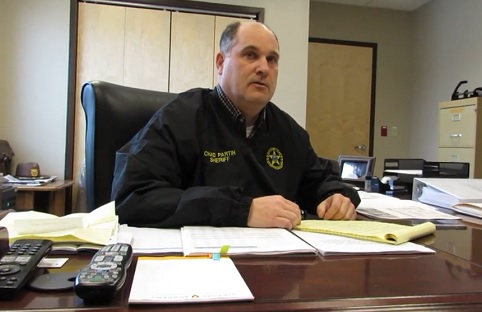 (This story contains language that may be considered by some to be racially sensitive. Discretion is advised).

The incident, which occurred in March, has led to a lawsuit filed by Jenna Amacher that is seeking $1.5 million in damages from the City of Manchester, MPD investigator Trey Adcock and Coffee County Assistant District Attorney Jennifer Craighead.

The lawsuit claims that Adcock and Craighead accessed Coffee County Jail video visitation with their government access and then posted portions of the video to social media in an attempt to defame Amacher. She was visiting with the father of her child, who was incarcerated at the time. The video portion taken and posted to social media allegedly shows Amacher using the phrase “nigga.”

Upon learning of this incident in the spring, Partin promptly cut off access for Manchester City Police Department to have remote access to the system. He also cut off Tullahoma Police Department. If those departments want to view video for a criminal case, they can go to the jail and watch in person or file a request for information.

“They can go through our office here at the jail if they need to watch something, or one investigator at the District Attorney’s office has access,” explained Partin. “But as far as individual access so they can sit around and watch like it is Entertainment Tonight, that’s not going to happen.

“I was really disappointed in a Manchester Police Department detective an an assistant district attorney because that was an investigative tool for them … or should be.”

“I know General Northcott was not happy,” added Partin. “Once I found out they were abusing that for something else and to try and taint someone else’s reputation, I had that access cut off.”

THE ORIGINAL STORY FROM THIS LAWSUIT PUBLISHED ON MONDAY, NOV. 28 IS BELOW:

Amacher is seeking $1.5 million dollars in damages for what she claims in the lawsuit to be “emotional distress” and “defamation,” among other things. Amacher claims this is a case of abuse of power, official misconduct and misuse of government resources and power. The lawsuit is dated Nov. 19, 2021. Thunder Radio News has thoroughly reviewed the suit and other evidence provided by Amacher. This lawsuit only speaks for the Plaintiff (Amacher) and does not offer any defense from Adcock, Craighead or the City of Manchester.

At the center of the litigation is a video posted to social media from a visit Amacher made to an inmate at the Coffee County Jail. According to the lawsuit, Amacher was having a video visitation with Waymond Brian Riddle (the father of her child) at the Coffee County Jail on March 3, 2020. During this visitation, the plaintiff used the word “nigga.” According to the lawsuit, this “must be taken into context with the entire conversation. Both plaintiff and Mr. Riddle are Caucasian.”

Unknown to Amacher, Adcock and Craighead allegedly accessed this video visitation using their “governmental authority, positions, resources and equipment.” Subsequently, one or both allegedly took a personal cell phone video of the plaintiff and published the video on social media. Amacher’s lawsuit claims that “the defendants did not view the visitation under the pretense of any investigatory authority or reasonable purpose.”

Amacher claims that after the video was posted, “an internet mob gathered against her.”

Amacher provided Thunder Radio with an open records request made to the Coffee County Sheriff’s Department that shows that someone by the username of “tadcock” and someone with the username of “jrcraighead” did access the video visitations in question on March 3 (see that letter at the bottom of this story).

According to Facebook profiles, Adcock and Craighead are listed as “in a relationship.”

“This case is clearly an abuse of power, official misconduct, misuse of government resources and power.  None of our government employees should be on the clock taking personal cell phone videos of information they are privy to with the INTENT to use it for purposes outside the scope of their employment,” Amacher said in an emailed statement to Thunder Radio. “This was used to maliciously attack and defame me and by individuals that should know better and be held accountable. At some point in our lives, many of us will find ourselves in a position that we would rather not be in, for instance, with a loved one in jail dealing with addiction and the wreckage that is left behind. No one in a position of power should be using this as an opportunity for a smear campaign. Such practice is predatory, demeaning, and it can cost a lot of residual damage. There is a proper way to retrieve the information that was released; these individuals did not choose to adhere to such, instead they acted with reckless disregard to the ethical standards that should be adhered to.

“Both police departments, the DA’s office, and the Sheriffs department have access (remotely) to view the visitation video logs. I believe some individuals have been using this privilege for conduct that is outside the scope of their employment… and possibly as “Days of our Lives” entertainment as such in this case. This practice is unprofessional, unacceptable, and absolutely deplorable.

“I want policies and procedures in place that prevent future misuse of government resources and time as well as safeguards that protect citizen’s privacy when information is obtained that falls outside the scope of an investigation or some legitimate reason for its release through proper channels.

“I will not stand for the abuse of power and I will continue to fight against it in my professional and personal capacity.”