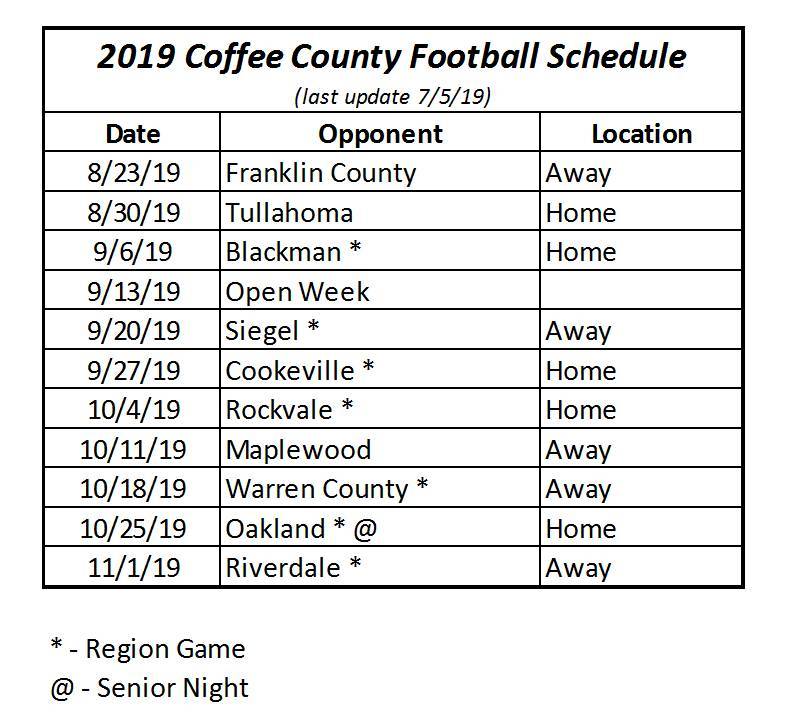 With the high school football season right around the corner, Coffee County CHS football coach Doug Greene has announced an updated schedule for the upcoming season.   After an initial schedule was released late last year, Rockvale was added to the region by the TSSAA forcing a schedule revision.  Earlier in the summer, Rockvale needed to move their game with Coffee County to accommodate a request from the Rutherford County School System.

With 6 weeks remaining before the season, the Red Raiders have finalized their 10 game schedule.  The Raiders will play 7 region games and 3 non-region opponents.  Coffee County will have non-region games at Franklin County and Maplewood with the Coffee Pot Game at home against Tullahoma.  Coffee County will have home region games against Blackman, Cookeville, Rockvale and Oakland.  The Red Raiders will visit region rivals Siegel, Warren County and Riverdale.

As always, Thunder Radio will be your home for Coffee County football broadcasts.  The Thunder Radio sports staff will team up to bring you unparalleled coverage again in 2019.  Josh Peterson and Brannon Reynolds will begin our live coverage at 6 PM with the Premier Lawn Care Pregame Show.  Dennis Weaver, Dustin Murray and Jonathan Oliver will join the pregame show at 6:30 PM from the stadium to set up each week’s contest.  After the game, Thunder Radio will have an extensive local postgame show as we interview Coach Doug Greene and some of the players.  We intend to concentrate on Coffee County football and our closest rivals, plus take your phone calls.

Tune in each Friday night, at home and on the road, to hear the very best in football coverage.  And remember to make our pregame and postgame shows appointment listening as Thunder Radio continues to be your source for Coffee County sports.