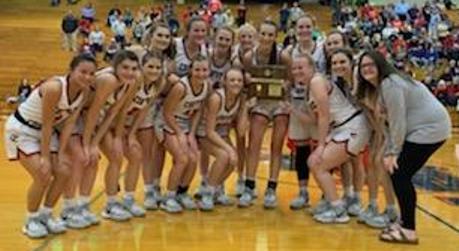 The Coffee County CHS basketball teams traveled to Fayetteville on Saturday for the final day of the District 8AAA postseason tournament.  The Red Raiders fell in the consolation game to Lincoln County 64 to 55.  The Lady Raiders used a strong 2nd half to claim the District 8AAA Championship with a 52 to 40 win over Tullahoma.

In the boys’ game, Coffee County fell behind early trailing by as much as 17 points in the 1st half.  In the second half, the Red Raiders caught fire and rallied to tie the game at 45 with 6 minutes left in regulation.  But turnovers hampered Coffee County down the stretch as Lincoln County outscored the Raiders 19 to 10 in the final stretch to grab the win.  The loss dropped the Red Raiders season record to 19 and 9

The Red Raiders were led in scoring by Jaylon Wooten who had 12 points as he selected the Stone Fort Mortgage player of the game.  C.J. Anthony and Kyle Farless each netted 11 points while Hayden Hullett chipped in 6.  After the game, Wooten was named the District 8AAA regular season MVP.  Anthony was tabbed to the all-district team.  Head coach Micah Williams was named the District 8AAA Coach of the Year.

In the girls’ title game, Coffee County jumped out to lead in the 1st half only to see Tullahoma tie the game at 17 just before the half.  As the horn sounded to end the first half, Bella Vinson was fouled while shooting a 3 point basket and hit all 3 free throws to give the Lady Raiders a lead they would not surrender.  Coffee County dominated the 2nd half to get their 3rd win in a row over Tullahoma.  The Lady Raider seniors finish their careers winning 13 of 14 games against the Tullahoma Class of ’20.

Bella Vinson was the leading scorer for Coffee County as she finished with 26 points, including going 17 of 17 from the free throw line, to earn the Stone Fort Mortgage player of the game honors.  Ellie Chumbley added 12 points and Jenna Garretson finished with 8.  The win improves Coffee County’s record to 27 and 3 on the season.  After the game, Vinson was named the District 8AAA regular season and tournament MVP.  Ellie Graham was selected to the regular season all-district team and Garretson was named to the all-tournament team.  Head coach Joe Pat Cope was named the District 8AAA Coach of the Year.

The Lady Raiders return to action on Friday when they host a Region 4AAA quarterfinal matchup at the Joe Frank Patch Memorial Gym.  Coffee County will take on either Blackman or Stewarts Creek.  Tip-off is set for 7 PM.  The Red Raiders will open up the Region 4AAA Tournament on Saturday night as they will travel to either Blackman or Siegel for the quarterfinals.  That game will also tip off at 7 PM.  Thunder Radio will be on hand to bring you the broadcast of both of the Coffee County basketball games as the official station of Coffee County CHS athletics.