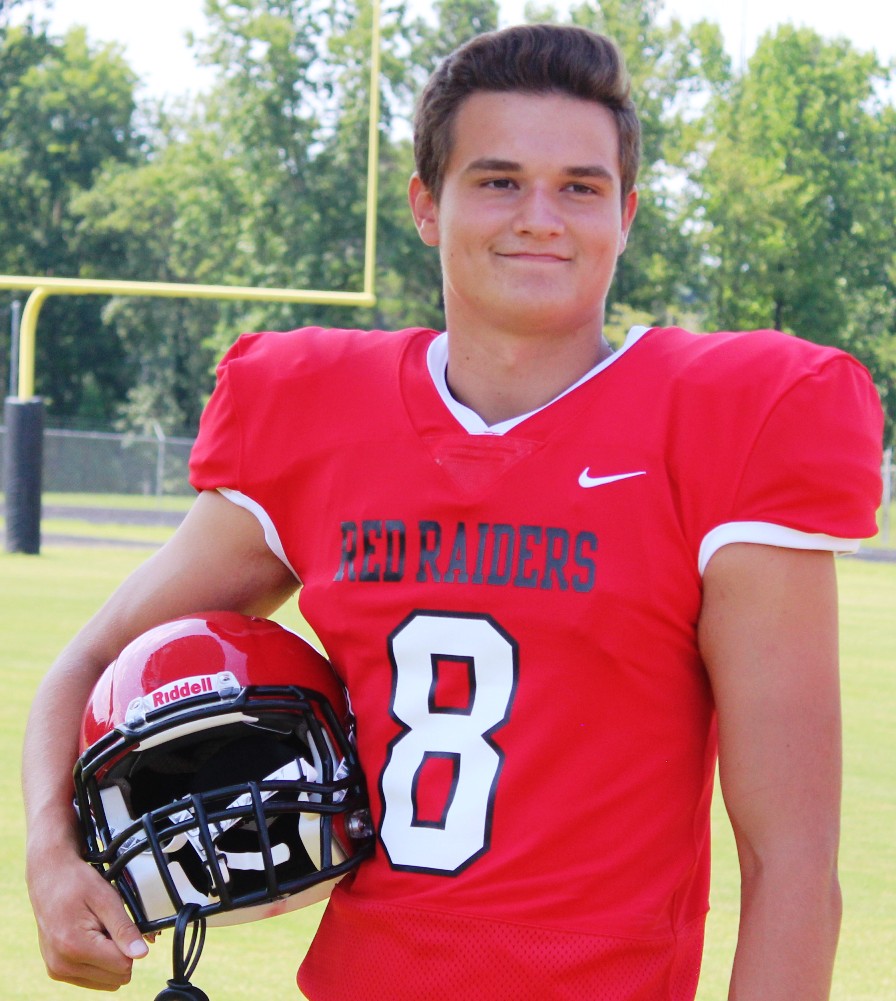 Big plays, timely defense, and poise under pressure was the perfect recipe for the Red Raider football team on Friday night as they rolled to a 42 to 36 win at Siegel.  In a game you heard here on Thunder Radio, the Raiders built a 21 point lead in the 4th quarter but had to recover a pair of onside kicks to stave off a late Siegel rally.  The win is the first for a Coffee County football team over a Rutherford County football team since 2004.

Blanton Brown got the Raiders on the board first with 6 seconds remaining in the 1st quarter when he intercepted a Siegel screen pass and rumbled 68 yards for a touchdown.  Felix Salinas hit the extra point to make it 7 to 0 Coffee County after one quarter.  Here is how it sounded on Thunder Radio:

After Siegel tied it, Coffee County marched down the field and scored with 1:22 left in the half as quarterback Matthew Pittman hit C. J. Anthony with a 13 yard touchdown pass.  Salinas drilled the extra point and the Raiders led 14 to 7 at the half.  Here is Dustin Murray with the TD call:

Coffee County and Siegel traded scores in the 3rd period as Pittman had a 7 yard touchdown run but the extra point was missed as Coffee County led 20 to 14 going into a wild 4th quarter that saw 6 touchdowns scored.  The Raiders went up 28 to 14 when Pittman rushed 22 yards for a touchdown then hit a fully prone Marshall Haney on the 2 point conversion pass.  Siegel matched that score with 9:47 left in the game to bring up a crucial kickoff.  Expecting an onside kick, Siegel kicked the ball deep and C.J. Anthony pulled it in at the 2 yard line.  Anthony raced toward the Siegel sideline and galloped 98 yards for the touchdown to put the momentum back in Coffee County’s hip pocket.  Here is how it sounded:

Marshall Haney tacked on an 11 yard touchdown run for the Raiders to make the score 42 to 21 with 6:20 left in the game.  Siegel added a pair of touchdowns, including one with 56 seconds remaining, but the Raiders recovered both onside kicks to control the clock and grab their first win of the year and the first win at Coffee County(in football) for head coach Doug Greene.

Pittman finished the game with 122 yards rushing on 15 carries and 2 touchdowns.  He was also 6 of 8 through the air for 111 yards and another touchdown as he was named the Mid Tenn Turf Most Valuable Player of the game.  Collin Ward caught 2 passes for 57 yards to lead the Raiders in receiving.  Haney had 58 yards rushing on 18 carries and a touchdown for Coffee County.  Kelvin Verge added an interception in the 4th quarter to shut down a promising Siegel drive.

Coffee County will be back at home on Friday night when they welcome Cookeville to Carden-Jarrell Field for Homecoming.  Opening kick is set for 7 PM, Thunder Radio will have exclusive coverage of the game beginning at 6 PM with the Friday Night Thunder Pregame Show, maintained by Premier Lawn Care.