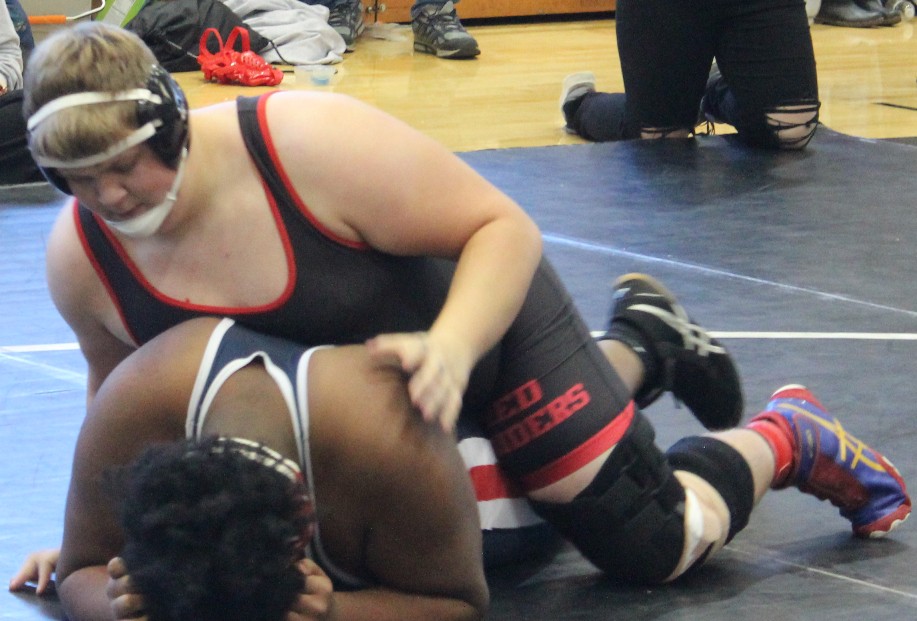 Two members of the Coffee County Red Raider wrestling team opened up competition in the TSSAA State Wrestling Tournament in Franklin on Thursday.  Cardin Stump and Gavin Prater were in action in Day #1 of the 3 day tournament featuring 32 wrestlers in each weight class.

Prater, a sophomore, wrestled in the 145 pound weight division as he entered the tournament with a match record of 29 and 10.  Prater dropped his first round match by a 3 to 2 decision to Kyle Cooley of McMinn County.  In the consolation bracket, Prater dropped a 13 to 4 decision to end his state tournament.  After being tied 2 to 2 at the end of the first round, Robert Bramblett of Spring Hill dominated the final 2 periods for the win.

Stump, a junior, wrestled in the heavyweight class as he entered the tournament with a match record of 24 and 11 on the season.  Stump won his opening round match in impressive fashion as he beat Terrance Lucy of Knoxville Central in 16 seconds via a pinfall.  In the round of 16, Stump lost a heart-breaking 4 to 2 decision to Tyson Love-Jones of Cordova.  In the consolation match, Stump trailed 6 to 2 entering the 3rd round but erupted for 5 points to force an overtime round.  In overtime, Stump grabbed a takedown with 13 seconds remaining in the round to grab the 9 to 7 decision win over Don Munoz McAmis of Morristown West.

Stump returns to Franklin on Friday as wrestling continues at 10 AM.  The medal matches will take place on Saturday.  The Lady Raider wrestlers will weigh-in at 8:30 on Friday and their first round matches will begin at 10 AM on Friday morning.  The girls’ championship will also be held on Saturday beginning at 10 AM.  Tickets for the event are $10 daily with a parking charge of $5 per car.

You can keep track of their performances in real time online at: http://www.tssaasports.com/wrestling