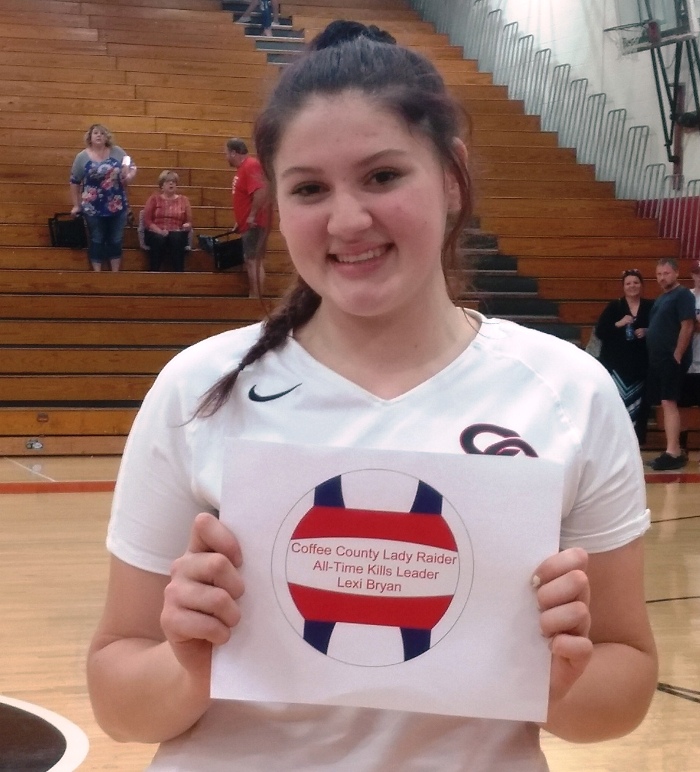 The Coffee County CHS volleyball team welcomed Columbia to the Joe Frank Patch Memorial Gym on Thursday night.  Looking to avenge their only district loss of the year AND lock up the regular season district title, the Lady Raiders were primed for the match-up.  Coffee County played nearly error-free volleyball as they swept Columbia in straight sets 25-17, 25-23 and 28-26.

Coffee County finished the night with a phenomenal 41 kills and 6 ½ blocks as they dominated at the net.  On a night where Lexi Bryan was 7 kills away from becoming the Lady Raider career leader in kills, the tall junior finished the night with 8 kills to bypass former Coffee County great Haley Banks in the record books.  Keri Munn and Kiya Ferrell each finished with 9 kills to lead the Lady Raiders.  Amanda Mukai led Coffee County in service aces with 5 and assists with 19.  Keelie Hillis had 8 kills, 17 assists and 6 digs.  Munn added 4 blocks while Ferrell led the team in digs with 16.