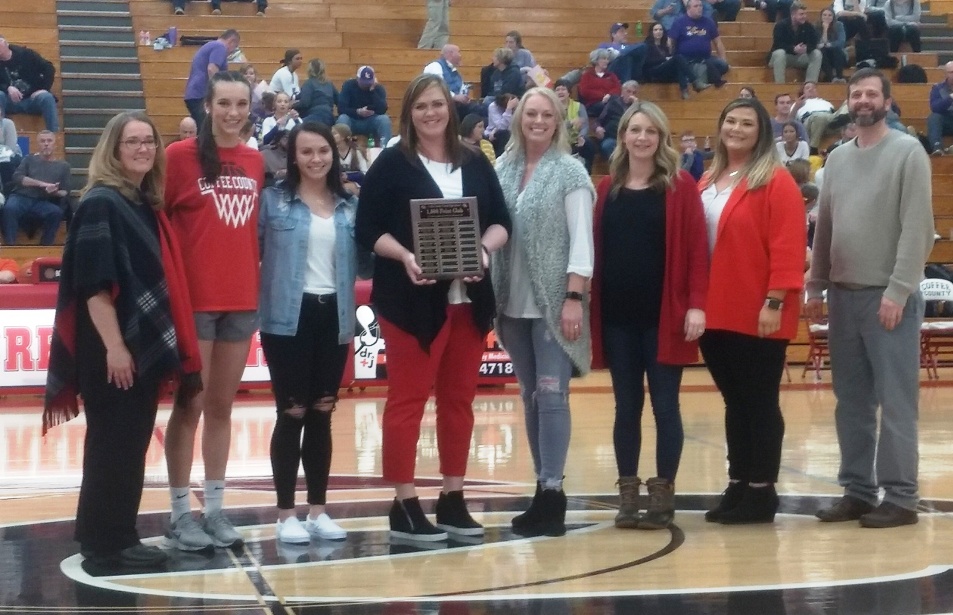 The Coffee County CHS basketball teams hosted Lawrence County on Friday night in a district doubleheader.   The Raiders and Lady Raiders captured their 10th straight doubleheader sweep on a night when the members of the school’s 1,000 point club were honored.  The Lady Raiders battled their way to a 47 to 23 win while the Red Raiders won in a 69 to 27 blow-out.

The Lady Raiders clinched the regular season district title, and the #1 seed in the district tournament, with the win and season sweep of 2nd place Lawrence County.  Coffee County jumped out to an 8 to 0 lead before Lawrence County could get on the scoreboard.  Leading by 14 entering the 4th quarter, the Lady Raiders opened the final period on a 13 to 2 run to salt away their 23rd win of the season.  Bella Vinson led Coffee County in scoring as she netted 11 points.  Seniors Ellie Graham and Jenna Garretson each scored 10 points as they were named the Stone Fort Mortgage co-players of the game.

The Red Raiders held Lawrence County to 6 points in the first half as they took a 40 to 6 lead into intermission.  Coffee County carried a 41 point lead into the 4th quarter as they rolled to their 18th win of the year.  Tyler Taylor led Coffee County in scoring as he had 18 points to earn the Stone Fort Mortgage player of the game honor.  Kyle Farless and Jaxon Vaughn each netted 10 points and Shawn Anderson added 8 points.

Coffee County returns to the court on Monday night as they travel to Fayetteville.  Coffee County will take on Lincoln County in a crucial district doubleheader.  The girls’ game will tip off at 6 PM and Thunder Radio will be on hand to bring you all the action.  Our live coverage begins at 5:50 with the Char-El  Apartment and Home Rental Pregame Show.