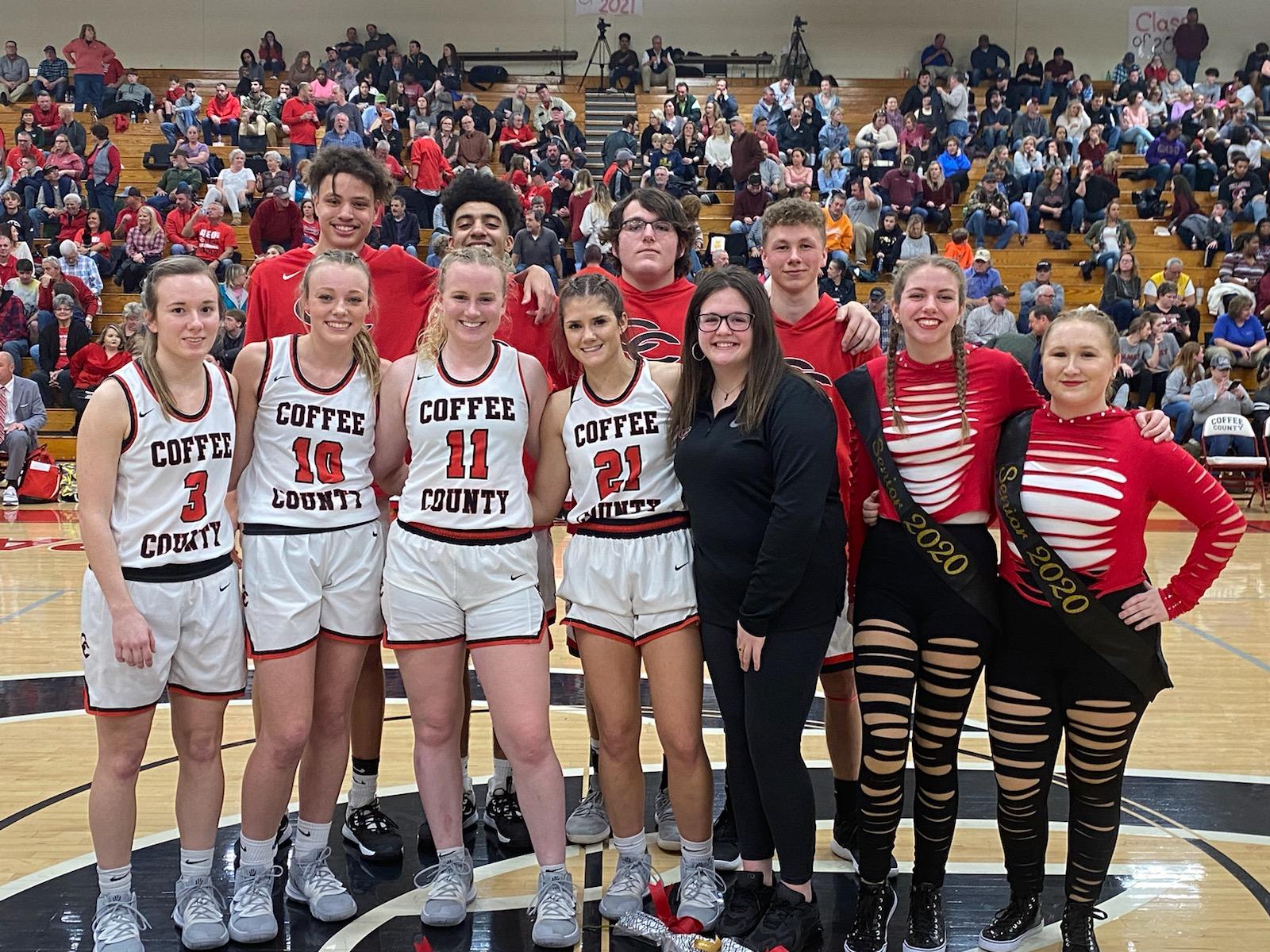 The Coffee County CHS basketball teams hosted Tullahoma on Thursday night in their final regular season home games of the year.  In a pair of Senior Night games befitting the bitter rivalry, the Raiders and Wildcats split the district doubleheader.  The Lady Raiders battled back from a 4th quarter deficit to capture a 37 to 32 win in overtime.  The Red Raiders saw Tullahoma hit 15 free throws in the 4th quarter to upset the Raiders 55 to 40.

In the girls’ game, the Lady Raiders got their first lead of the game with 45 seconds remaining in regulation when a Bella Vinson field goal made it 26 to 24.  Tullahoma tied the game to send it to overtime.  In the bonus period, Jenna Garretson drew a charge as the Lady Cats went for the tying basket with 3.5 seconds left in overtime and the Lady Raiders iced the game at the free throw line.  Vinson led the Lady Raiders in scoring with 14 points.  Garretson and Jalie Ruehling each added 8 points as Coffee County improved to 25 and 3 on the season.  The Lady Raiders finished the season with a perfect 12 and 0 district record for the 2nd straight year.  Coffee County seniors Morgan Jones, Keelie Hillis, Jenna Garretson and Ellie Graham were named the Stone Fort Mortgage players of the game.

The Red Raiders trailed by 9 points entering the 4th quarter but cut the deficit to 6 points with 5:45 left in the game.  From that point, Tullahoma outscored Coffee County 17 to 8 to grab the win.  Coffee County was led in scoring by Jaylon Wooten, C.J. Anthony and Rod Brinkley who all finished with 7 points.  Connor Shemwell finished with 5 points.  Red Raider seniors Wooten, Brinkley, Shawn Anderson and Collin Ward were named the Stone Fort Mortgage players of the game.

The Red Raiders and Lady Raiders will finish the year with the District 8AAA regular season district titles and will enter next week’s district tournament as the #1 seeded teams.  Both Coffee County teams will receive 1st round byes and have automatically qualified for the Region 4AAA Tournament.  The District 8AAA tournament will open on Saturday with a pair of play-in games.  The Red Raiders will open up tournament play on Thursday at Lincoln County at 6 PM.   The Lady Raiders will play in their semifinal game on Friday at 6 PM.  The finals and consolation games are on Saturday and all of those games will take place at Lincoln County High School in Fayetteville.