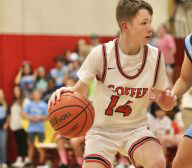 Coffee Middle’s Red Raiders used their defense on Thursday, and that was enough to get them to the CTC Championship game.

The Raiders smothered East, holding the Panthers to only 19 points in a 31-19 win in the tournament semi-finals at North Middle.

The Raiders held the Panthers without a field goal in the fourth quarter, allowing only 2 points, which came on free throws.

Offensively, 7 different Raiders dropped the ball in the basket, led by 8 apiece from Marc Rollman and Jacob Mullen.

The Raiders will now play top seeded Harris in the tournament championship at 6 p.m. Friday at North Middle. CMS split with Harris during the regular season.