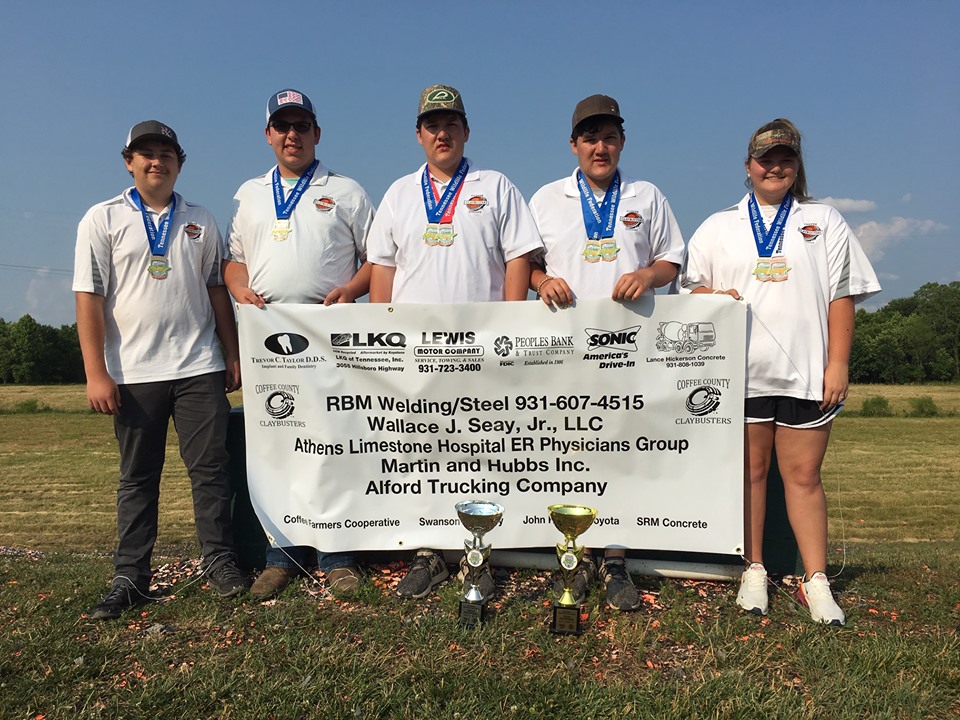 The Coffee County Claybusters competed in the Tennessee Scholastic Clay Target Program (SCTP) State Championships on Thursday and Friday of last week.  As is customary for the Claybusters, they returned home with a team state title.  Additionally, the individual performances netted individual state championships for a trio of Claybusters.

The Coffee County CHS JV team won the Senior/Junior Varsity team title on Friday as they scored 479 hits out of 500 targets on the day.   They outdistanced 2nd place Tipton County by 15 targets.  Leading the Claybusters was Landon Meadows who was perfect at the line shooting a 100.  Emma Mathews and Logan Meadows were close behind with matching 98’s.  Xavier Bartley shot 93 and Brayden Davenport shattered 90 clays.

The high school varsity team put up an impressive score of 480, but that was only good enough for 10th place in the talented field.   They finished 16 clays out of 1st place as Cumberland County shot a phenomenal score of 496 out of a possible 500.  Victoria Jacobs led the senior team as she shattered 99 clays.  Hayden Jacobs was right behind at 98 while Tucker Carlton shot 97.  Colter Smith had a round of 95 and Cheyenne Martin came in at 91 targets.

On Thursday in the middle school Intermediate Advanced Division, the Claybusters captured a 2nd place finish with a score of 451.  They finished 17 clays behind the championship team from South Gibson.  Pacing the middle schoolers was Garrett Taylor who shot a 96.  Riley Bellomy dropped 93 birds and Jonah Wyatt was right behind him with 92.  Dylan Hickerson shot 87 targets while David Braden downed 83 fliers.