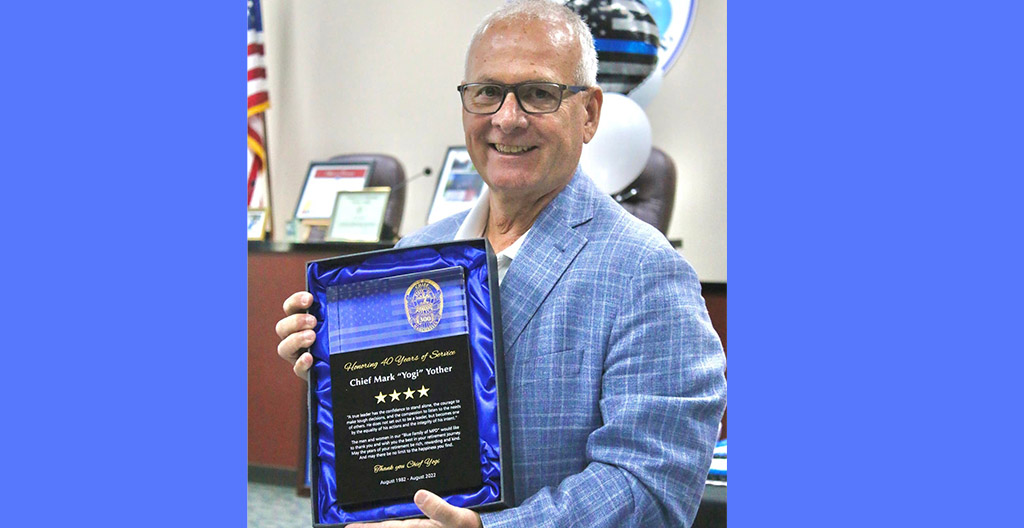 Outgoing MPD Chief Mark Yother poses with a 40-years of service plaque presented to him at his retirement Friday, Aug. 26, 2022.

Yother was presented with a 40-years of service plaque, among other gifts.

Yother, who has served as police chief for the past 10 years, announced his retirement earlier this month. His last day will be Tuesday, August 30th. He has served with MPD for the past 40 years.

Yother turned in a notice to Manchester Mayor Marilyn Howard last week announcing his retirement. He has served as chief of police since September of 2012, when Ross Simmons retired. Prior to that he served as chief investigator, investigator and patrolman.

“I would like to thank God first and foremost, and of course my family and the citizens of Manchester,” said Yother, who began as a patrolman Aug. 25 of 1982. “Want to thank all the good policemen for their hard work. I’m happy and excited about retirement. I may rest up but I’m kind of hyper so it’s hard to sit still.

“I would like to volunteer or find something part time where I can be involved in helping people,” added Yother. “I’ve coached ball all my life and special Olympics has been a big part of what we have done. So maybe I can find a way to get involved but I don’t have any big plans at this time.”

Mayor Howard told Thunder Radio News that Yother has “served our city well.” She said that Municipal Technical Advisory Service (MTAS) will guide the hiring process of a new chief of police, saying that the advisory board will help conduct interviews and narrow the applicants down to two people to recommend to the Board of Mayor and Aldermen. But ultimately, the Manchester BOMA has final say.

Howard said the hiring of a new chief is expected to be a quick process. However, she added that the new board of mayor and alderman will make that decision. There will be at least three new aldermen after the Aug. 4 election, possibly four. The new board will be sworn in at the first meeting of September.

Howard said that no interim chief will be named, leaving assistant chief of police Adam Floied in charge of the department as of Sept. 1 until a replacement is named.