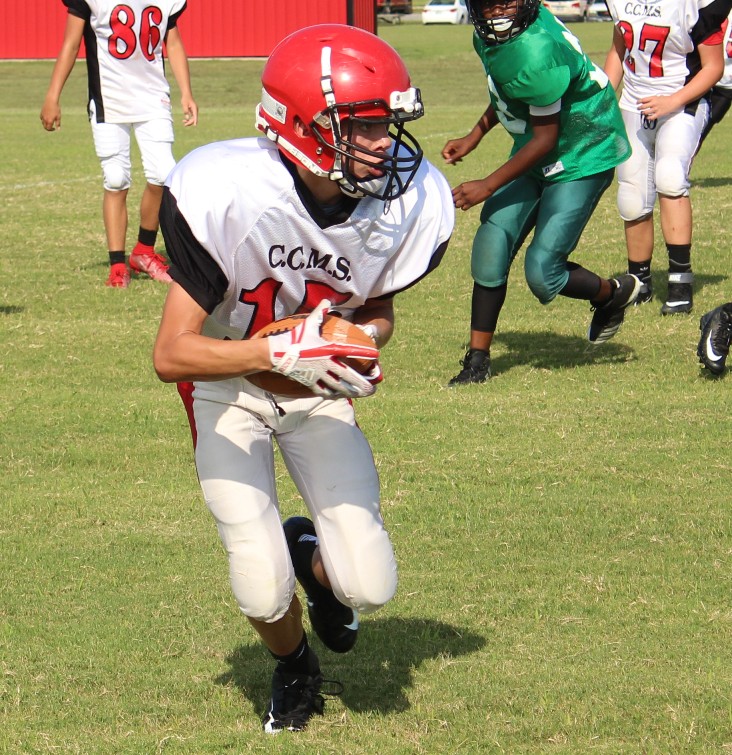 Ethan Hargrove cuts up field after receiving a pass on Thursday

The Coffee County Middle School football team welcome to Whitworth-Buchanan to the CCMS practice field on Thursday afternoon for a scrimmage. With each team alternating 10 play series, Coffee County won the scrimmage 21 to 12. The Red Raider first string offense scored on both of their possessions and the defense returned a fumble recovery for a touchdown and sacked the quarterback in the end zone for a safety.  Whitworth’s two touchdowns came against the Red Raiders second string.

At that point Coffee County substituted liberally.  Whitworth-Buchanan scored two touchdowns on the 2nd string. Coach Brian Morgan was pleased with the effort of his team. He called out the execution of the offense and the strong defensive play of his squad.

The Red Raiders open the season on Tuesday at Watertown taking on the Tigers of Watertown Middle. Opening kick is set for 6:30 p.m.  Thunder Radio will be on hand to bring you the broadcast as part of the First National Bank Hometown Sports Series. We begin our live coverage with the pregame show at 6:20