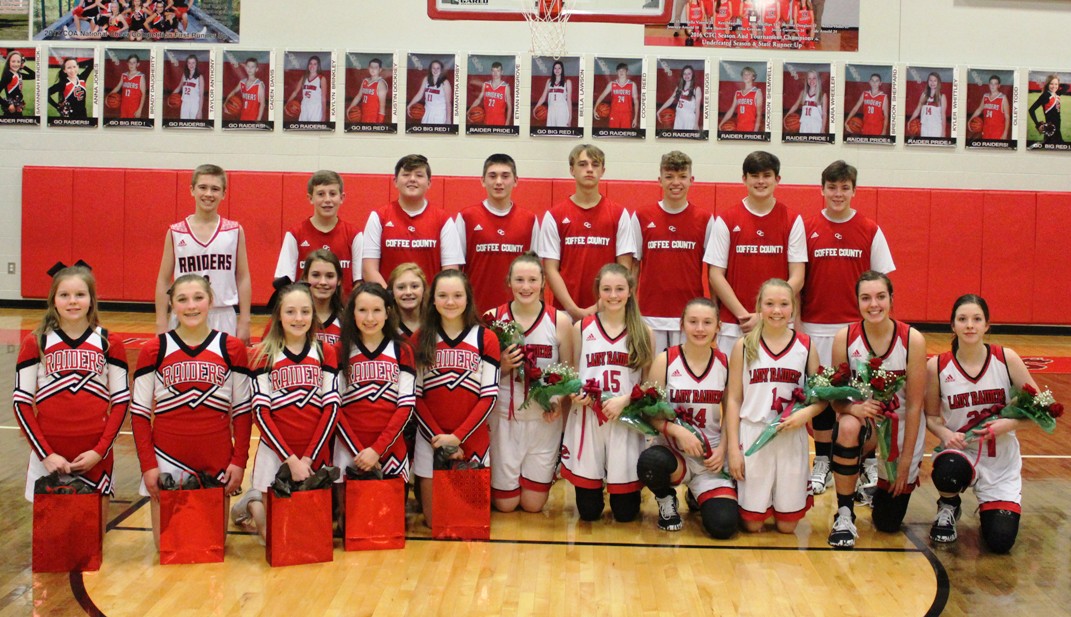 The Coffee County Middle School basketball teams celebrated 8th Grade Night on Thursday as they welcomed Warren County to the CCMS Gym.  The Lady Raiders needed overtime to grab a 49 to 42 win.  The Red Raiders battled to the very end before falling 34 to 31.

In the girls’ game, Coffee County trailed by 8 points with 2:21 left in the game when Olivia Vinson was fouled hitting a shot.  Vinson drained the free throw and 2 technical free throws to make it a 5 point play.  Vinson added a bucket in the ensuing possession as the Lady Raiders cut the deficit to 1 point in a span of 24 seconds.  Bella Vinson hit a free throw with 10 seconds left to tie the contest at 39.  The Lady Raiders made 8 free throws in overtime to grab the victory and a season split with the Lady Pioneers.  Olivia Vinson led the Lady Raiders in scoring with 21 points.  Samantha Kirby added 11 points while Lawson finished with 5 points.

In the boys’ game, Coffee County and Warren County engaged in a 4 quarter war before the Pioneers pulled it out in the end.  Coffee County led by 2  entering the 2nd period, but Warren County opened the 2nd period on an 11 to 3 run to build the largest lead for any team in the game.  Jackson Shemwell hit a pair of baskets to close out the period as the Raiders cut the Pioneers lead to 2 at intermission.  Shemwell led the Raiders in scoring as each finished with 13 points.    Evan Kirby added 11 points.