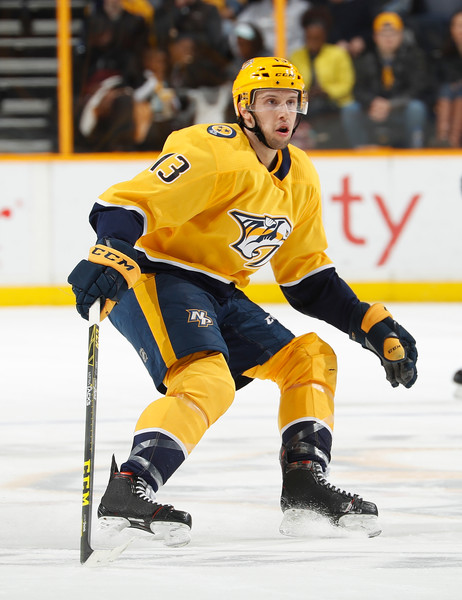 As country-music superstar Maren Morris sings, “If the bones are good, the rest don’t matter.” On Tuesday night, the man the Preds call “Bones” was quite good.

Nick Bonino notched a hat trick and Pekka Rinne stopped all 20 shots he faced as the Nashville Predators shut out the Chicago Blackhawks by a 3-0 final on at Bridgestone Arena. The result extends Nashville’s win streak to four games, a stretch that has seen the Preds only allow three goals in total.

The Predators outshot the Blackhawks by a 51-20 margin, a mark that was just four away from Nashville tying their franchise record for shots in a single game. Bonino accounted for nine of those – a career-high – and Chicago goaltender Robin Lehner gave his team a chance, but the Preds were all over the Hawks from start to finish.

A day that began with Predators Captain Roman Josi signing a fresh eight-year contract, ended with Rinne posting back-to-back shutouts at home for the first time since 2013 and slews of Preds fans leaving without hats.

“What a night for him,” Rinne said of Bonino. “He’s had a hot start to the season. He’s been a really awesome player for us this year, and I’m happy for him. There were three kind of similar goals in front of the net. That whole line was playing extremely well with [Craig Smith] and Rocco [Grimaldi], and they were creating all night. I’m really happy for them.”

“It was strong from start to finish,” Preds Head Coach Peter Laviolette said of the effort. “There weren’t many shifts where I don’t think we competed at a really high level, really tried to force the issue and press the pace and play a fast game. Offensively, we made good decisions and defensively I thought we competed really hard.”

Bonino’s first of the night came late in the opening period when he finally converted after he and his teammates had Lehner under siege in their own end.

Nashville finished with 18 shots in the first, and they added 22 more in the second – plus a second for Bonino. The Preds centerman banged home a loose puck in front for his fifth of the season and a 2-0 advantage through 40 minutes. Defenseman Dante Fabbro assisted on Bonino’s second tally, his first helper in the NHL.

Just three minutes into the third, Bonino completed the hat trick, his first with the Preds and third of his career. The trick was of the natural variety, and Rocco Grimaldi recorded the primary assist on all three of Bonino’s tallies to post the first three-point game of his NHL career.

“Rocco’s speed backs you off and creates a lot of space for us,” Bonino said of his line. “Smitty, whenever you see him, he’s battling. He’s so hard on the puck, he had two assists; very involved, all three of us all night. We were in the offense zone a lot, that always helps.”

The defensive effort was exemplary again for the Predators as they posted their second-straight shutout at home. Nashville has only allowed two goals in their last three games, and they’ve gone five outings in a row surrendering two goals or less in regulation time.

“It’s been a lot better,” Bonino said of the defensive play. “Our last five games we’ve made a concerted effort to do that, not only in the defensive zone but also in the offensive, making smarter decisions. When every line does that it usually translates to wins. When lapses do happen, we have the best goalie in the League.”

Lehner was stellar for the Blackhawks, and his counterpart in net knows if it weren’t for the play of the Blackhawks netminder, the score could have been much higher behind Nashville’s relentless effort.

But on this night, the credit belonged to No. 13.

“I’m just happy to see a guy like that get rewarded,” Grimaldi said of Bonino. “Smitty and Bones, tonight, were just awesome. I think it was their best game by far this year… Bones putting three in, it was fun. Honestly, sometimes we’re going to the bench like, ‘This is fun, this is hockey and this is the best.’ We just have to keep going like this, keep building momentum. It’s one game and it’s done now, and we have to put it past us and look to the next game.”

The Preds may have made it seem easy, but two points are never automatic in today’s NHL. A four-game winning streak is something to be proud of, and while the season is still relatively young, there’s plenty to gain from the past week, not to mention eight more points in the standings.

“It’s been great,” Rinne said. “It’s nice to win some games in a row against good teams, too. Tonight was just total domination. You can sense the confidence in the locker room and it shows on the ice too, so it’s a good feeling.”

Prior to Tuesday’s game, the Preds recalled forward Colin Blackwell from the Milwaukee Admirals. Blackwell did not play on Tuesday.

On Tuesday morning, the Predators announced an eight-year, $72.472 million contract for Captain Roman Josi. Click here for more on the deal.

Nashville’s three-game homestand continues on Halloween when the Calgary Flames come to town (at 7 p.m. CT) and then finishes up on Saturday afternoon when the Preds welcome the New York Rangers to Bridgestone Arena for a 1 p.m. matinee.