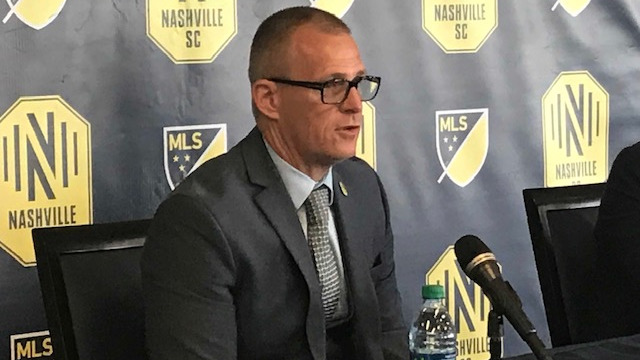 It’s midday in Nashville and Gary Smith is sitting upstairs in his home study. It’s not where he usually would be and it’s not where he wants to be. An unprecedented world event means soccer coaches are, like everyone, adjusting to a new normal.

“When you’re in the everyday, working, coaching, media, planning, matches, debriefing, your brain is working a million miles an hour, “ says the 51 year old. “It is abnormal, that you just come down two or three gears…personally I do feel a little bit lost if I’m honest.”

Some solace is offered by a glance to the book shelf where a framed football sits, signed and encased. It represents the greatest achievement of Smith’s soccer career, something he yearns to repeat one day in Nashville. It’s the match ball from the 2010 MLS Cup Final. Smith’s Colorado Rapids upset the odds, winning through the playoffs and lifting the Cup with a 2-1 win over FC Dallas in Toronto, Canada. It was Coach Smith’s daughter Millie, then just a six year old, who grabbed the ball and it’s been a part of the Smith household since wherever they’ve travelled on both sides of the Atlantic.

Smith’s journey to the top of MLS a decade ago was an unusual one. How did he even end up in charge of the Rapids? How has the league changed during his nine year absence? And just how much would he like to beat Real Salt Lake?

Early impressions of MLS were mixed for Smith who arrived in Colorado in 2008 on a mission from sister club Arsenal to set up a scouting network. “ I walked into a preseason camp for the Rapids, they were in the early stages and down in Fort Lauderdale, facilities were fantastic, that was my first impression, wow we’re in Florida the sun’s out… this is a bit special.”

The impression didn’t last long. He saw a level of professionalism below what he was used to. At the time, it all felt a bit “non-league-esque” for a man who had played and worked at Arsenal, Fulham and across the English Football League.

Nevertheless, the Rapids thrashed LA Galaxy 4-0 in their opening game of the 2008 season. “I remember scratching my head thinking everything I’ve ever thought about this game I’ve got completely wrong! We absolutely demolished LA Galaxy.”

It wasn’t to last and Smith’s football brain wasn’t deceiving him. The lessons of pre-season caught up on the team, he felt. Head Coach Fernando Clavijo resigned after a difficult run of results and with a third of the season to go. Smith did not consider himself an obvious candidate, initially as an interim boss. “I didn’t know the league well enough. It was going to be my first head coach’s job. The Chief Executive said “well if you don’t take it, everyone you know and who you like here is going to get the sack at the end of the season anyway.” So, was he an accidental manager? “I was almost last man standing!”

It was a life changing moment for Smith, setting him on a course to join a select group of English managers who had won domestic titles overseas. The 2010 MLS Cup success would define his tenure in the Rockies, but it was a game in 2009 which was the catalyst for what would follow.

“With seven games to go we looked absolute bankers for the playoffs but we had three wide players go down with injury. We lost all our width…we absolutely stumbled towards the end of the season and we went to Salt Lake, the last game of the season, and we could afford to be beaten by two clear goals and still go into the playoffs and we got beaten 3-0. Our local rivals not only pipped us to the playoffs, they went on and won it (MLS Cup) as well.”

It lit a fire inside Smith and his staff. He admits he fell out with “almost everybody” as he got straight to work for the 2010 season, tweaking his roster and never forgetting the frustration of Real Salt Lake.

“We started off reasonably well, we then had a couple of problems up front and then we went through the middle third of the season really flat. We weren’t scoring a lot of goals. I was trying to find a way to be a better group, to control games better with the ball in possession, so we changed our shape. We played Conor (Casey) up top, Omar Cummings wide right and we played pretty much a 4-3-3 and we were a better team with the ball but we couldn’t score.”

So Smith changed it back to a 4-4-2 and the result was more goals and a run to the playoffs which had the Englishman seeing new belief in his group. But one last regular season game with some extra bite in it remained. The old nemesis – Real Salt Lake. “The League loves those rivalry fixtures at the end of the season and the players still had that taste in their mouth from the year before and we played them at our place and I whipped everyone up into a frenzy. We were 2-0 up and we absolutely took them to the cleaners. 2-0 up going into injury time……and we drew 2-2.”

However, on this occasion, RSL had done the Rapids a favour. The draw sent them into the Eastern Conference playoffs. It was a different path to the Cup Final and a path that would lead to glory. “In terms of maybe fate, it took us a different route. I’ll never know, nor will anyone else, what it might have meant if we’d played in the West. It was really strange, and I never felt like we really got one over Salt Lake even though we won it!”

There was symbolism in the MLS Cup trophy as Smith and the Rapids lifted it on a special night in Toronto. “All the hard work the sacrifices and the trials and tribulations that you go through are almost sitting there in front of you in this chunk of metal and that’s really what it feels like.”

Smith isn’t short of colleagues to reflect on those heady days. He’s been joined in Music City by the likes of Brett Jacobs, Steve Guppy, Matt Pickens, Jamie Smith and Kosuke Kimura.

“When I look back we had the right balance” says Kimura, defender on that championship side. “We were so organised defensively, hard to get broken down. We had a pride in every position; we had that character and motivation to win the games. Some players, they struggle with Gary in playing or understanding what he’s asked for. He will definitely tell those players straight up. He’s just an honest guy; he doesn’t know how to lie.”

Soccer fairy tales often have a sting. A year after the MLS Cup win, and amid behind the scenes turbulence, Smith was out in Colorado. But he’d left his mark with many of the group.

Kimura didn’t hesitate when given the chance to link up with him again. The first Japanese-born player in MLS went to the Atlanta Silverbacks FC in the National Premier Soccer League to play under him before coming to Nashville.

Smith’s exit in Colorado may have been acrimonious but it’s now a powerful driving force behind the coaching staff’s bid to bring success to Nashville nine years on from the end of his tenure in Denver. “We’re more than hungry,” says Kimura. “We’re starved, we have to do it…who knows the next chance we’re going to get… all of us and all of the staff, this could be our last chance.”

Back in his home office, Smith has an unexpected window to assess the season so far and the MLS world he’s walked back into. Football in general has changed since his last job in the league. “There is a much bigger emphasis I think at a lot of clubs to be more positive, whether that is pressing higher up the field and winning the ball in more aggressive areas, playing at a pace that is far more difficult to manage for opposing teams.” Smith cites the Red Bull clubs across Europe as prime examples of the energetic football now in fashion. In MLS in particular, that energy also needs to breed entertainment in a crowded US sports market.

Two narrow defeats have not dimmed Smith’s view of his current squad. “I certainly am delighted in the way that my team have come together in such a short space of time, but the one thing that was always going to be a concern was goals and I don’t think we’ve been anywhere near as clinical as we could have been and that’s been detrimental for our results. On the flip side to that, if I look at some of the stats from the two games we’ve played, we’ve limited two very good sides in different situations to next to no efforts at goal. In terms of the culture we have created and the way that we have set about our business, I’d like to think that anyone watching the two games thus far would say that the team has all of the modern MLS abilities and qualities that would be expected.”

Nearly 60,000 fans attended Nashville’s MLS debut which was also aired nationally on Fox last month. “Sensational,” says Smith “It was a great feeling. There were many emotions for me personally nine years away from MLS and 10 years from actually lifting the trophy. The ownership group here, John [Ingram]’s an incredible person, Ian [Ayre]’s been nothing short of wonderful to work for and that also adds to the occasion because you feel as though you’re part of something bigger and there is a future.”

When Smith looks to that future, it’s a memory from the past which proves the inspiration. He can glance back at the match ball on his book shelf and remember Colorado’s MLS Cup win. “I would so love to be able to repeat that or to win silverware again,” he says. He wants to do it in Nashville.