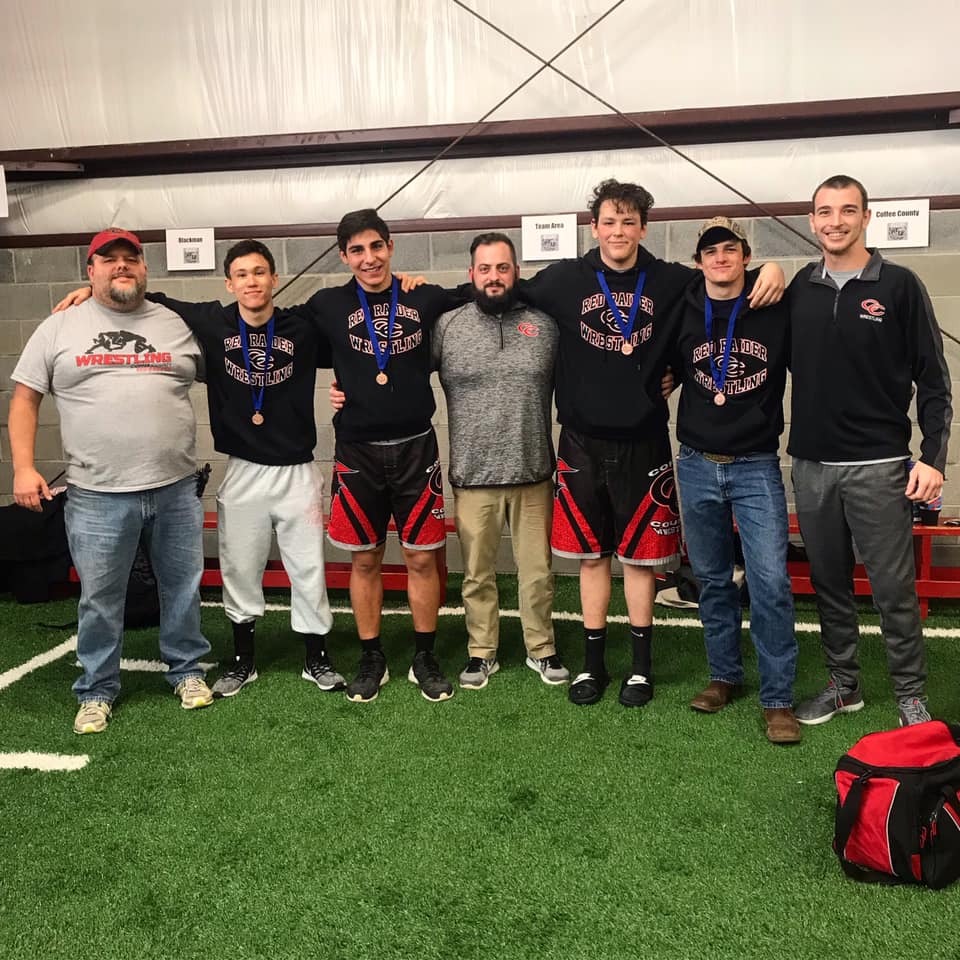 Mary Anne Walker qualified for the state meet in February as she highlighted a contingent of 3 Lady Raider wrestlers for the 2018-2019 season.  Thunder Radio brought you the story of her success in a story we published on February 18th.

The Coffee County wrestling team closed out their most successful season ever on Saturday at the TSSAA state meet in Franklin.  Lady Raider wrestler Mary Anne Walker became the second medalist in program history as she claimed a 5th place finish in the 125 pound class of the girls’ tournament on Saturday.  Walker, a sophomore, finished the tournament with a record of 2 and 2 as she won the 5th place match in a first round pinfall.

Rey Reyes(at 182 pounds) was the highest finisher for the Red Raiders as he was eliminated in the round of 16.  Reyes was 2 and 2 on the tournament as grabbed a pair of pinfall wins on Thursday.  Reyes was eliminated just short of the medal stand by a pin on Friday morning.

You can see the official results online at: http://www.tssaasports.com/wrestling

The Red Raider wrestlers enjoyed the best season in program history as 4 Red Raiders qualified for the state meet in the Region 5 Tournament in February.  Thunder Radio brought you the news in a story we published on February 11th.

At 120 pounds, junior Brett Francis had to fight through the consolation bracket to capture 3rd place in the weight class.  After a getting a pin on Friday night in the first round, Francis suffered a 2nd round loss on Saturday to Samuel Hadlock of Cookeville.  Francis came back on Saturday to get a pair of decision wins heading into the consolation finals and a rematch with Hadlock.  Francis, a junior, fought his way to a 5 to 4 decision to upset the higher seeded senior and capture the 3rd place medal.

At 145 pounds, senior Jesse Hay-Smith used 3 decision wins to grab a 3rd place finish in the tough weight class.  After a first round bye, Hay-Smith got a 7 to 2 decision win over Blackman wrestler Aaron Fisher in the 2nd round.  On Saturday morning, Hay-Smith was pinned by 2nd seeded Michael Williams of Shelbyville to fall into the consolation bracket.  Hay-Smith fought his way to 2 straight 4 to 3 decision wins to capture the 3rd place medal.

At 182 pounds, senior Reynaldo Reyes entered the tournament as the 6th seeded wrestler and fought his way to a 4th place finish.  Reyes opened tournament action on Friday with a pinfall win before falling in and pinfall loss in the 2nd round to Nolan Cook of Oakland.  Coming back on Saturday, Reyes got a pair of pinfall wins, including an upset win over Brian Nelms, to advance to the consolation finals.  In the finals, Reyes fell once again to Cook to end the tournament with a 4th place finish.

At 220 pounds, junior Chris Speagle entered the tournament as the 9th seeded wrestler before rolling to a 4th place finish.  Speagle got a quick pinfall win in the opening round before falling to top seeded Bowdy Boyce in a 3rd round pin in his second match.  On Saturday, Speagle got a bye, a decision win and a pin to advance to the consolation finals.  In the 3rd place match, Speagle fought to a decision loss to Jimmy Pearson of Tullahoma.

The state tournament will begin on Thursday at the Williamson County Agricultural Exposition Park in Franklin.  The boys weigh-in will take place at 1 PM on Thursday with wrestling getting underway at 3 PM in the first 2 rounds. Wrestling continues on Friday at 10 AM with the championships on Saturday.  Lady Raider wrestler Mary Anne Walker will weigh-in at 8:30 on Friday and her first round match will be at 10 AM on Friday morning.  The girls’ championship will also be held on Saturday beginning at 10 AM.  Tickets for the event are $10 daily with a parking charge of $5 per car.