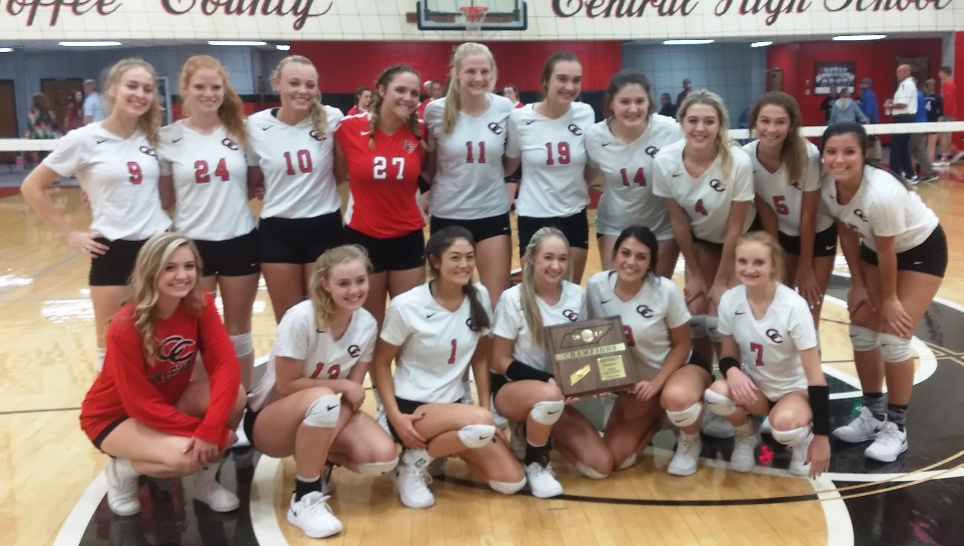 The Coffee County CHS Lady Raider volleyball team won their 2nd district title in the last 3 years in October making yet another appearance in the region tournament.  The Lady Raiders accomplished the feat with a doubleheader sweep of the semifinals and finals at the Joe Frank Patch Memorial Gym.  Thunder Radio was on hand to bring you the broadcast and reported on the wins in a story we brought to you on October 11th.

Hosting the District 8AAA volleyball tournament on Thursday, the Coffee County Lady Raiders were looking for their 8th consecutive trip to the region tournament and their 2nd district title in the last 3 years.  A straight set win in the semifinals over Franklin County accomplished the first goal.  The Lady Raiders captured the second goal with a straight set win over Lincoln County.

In the finals, Coffee County dominated the play at the net and overcame 16 service errors to capture the win by set scores of 25-15, 25-19 and 25-21.  Coffee County had a 38% hitting success rate as they hammered home 43 kills in the match.  Coffee County also finished with 9 ½ blocks.  Keri Munn and Kiya Ferrell each finished with 11 kills to lead the Lady Raiders.  Kellie Hillis and Lexi Bryan each added 8 kills.  Munn finished with 5 blocks and Hillis added 4.  Amanda Mukai led the team in aces with 2 and assists with 25.   Ferrell and Sarah West led the team in digs as each had 9.

In the semifinals, the Lady Raiders cruised to easy wins in their first 2 sets by set scores of 25-13 and 25-7.  In the 3rd set, the Rebelettes rallied to lead most of the match.  Coffee County fought off 4 set points to grab the set and the match by a set score of 28 to 26.  The Lady Raiders finished with a remarkable 40 kills in the match led by Kiya Ferrell who had 11.  Keri Munn added 10 kills.  Ferrell and Munn both served up 2 aces.  Lexi Bryan and Amanda Mukai led in aces as they each served up 3.  Mukai led in assists with 16 while Bryan finished with 8 kills and a block.  Keelie Hillis had a block and 10 assists for the Lady Raiders.  Sarah West led Coffee County in digs with 7.

The Lady Raiders will travel to Murfreesboro on Tuesday for the Region 4AAA tournament at Siegel.  Coffee County will match up against the District 7AAA runner-up Blackman.  Opening serve is set for 5:30 PM.

Download the broadcast of the semifinals over Franklin County at: http://www.podcastgarden.com/episode/franklin-county-at-coffee-county-volleyball_149631

Download the broadcast of the finals over Lincoln County at: http://www.podcastgarden.com/episode/coffee-co-vs-lincoln-co-2019-dist-8aaa-volleyball-finals_149637

The Temple Baptist Christian School volleyball team expected to have a rebuilding effort in front of them in 2019.  But the Lady Eagles finished the season with more than 20 wins and several strong performances.  The highlight of the year came in early October as they grabbed a 2nd place finish in the always strong Madison Baptist Academy tournament.  Thunder Radio reported on the tournament performance in a story we brought to you on October 7th.

The Temple Baptist Christian School volleyball team spent Friday and Saturday in Alabama competing in the Madison Baptist Academy tournament.  The Lady Eagles fought their way to the championship game against Clays Mill out of Kentucky.  But playing their 5th match of the day, Temple fell to Clays Mill to come home with the runner up trophy.

The Lady Eagles opened up tournament play on Friday with 3 pool play games.  The Lady Eagles got wins over Cornerstone Baptist and Anchored Christian and lost their match to Victory Baptist of Shelbyville.  On Saturday in tournament play, Temple got a pair of wins to open the day before advancing to the winner’s bracket finals.  The Lady Eagles defeated Mountain View, AL and Victory Baptist in a rematch to set up a battle with Clays Mill.  The Clays Mill team of Lexington, KY stopped Temple sending them to the elimination bracket.  The Lady Eagles got a win over Anchored by a single point to earn a rematch in the finals against Clays Mill.  After their 2nd place finish, junior Lauren Davis of Temple was named to the All-Tournament Team.

The Lady Eagles have the last regular season matches in a tri-match format Tuesday in Cleveland where they will play Shenandoah Baptist and Fairview Christian. The season will concludes this weekend with another tournament in Louisville, KY hosted by Landmark Christian Academy.

The Coffee County Middle School volleyball team saw improvement in 2019 under first year head coach Tori Taylor.  One of the big wins for the Lady Raiders was a come-from-behind road win over Tullahoma.   Thunder Radio was on hand to bring you the broadcast and reported on the win in a story we brought to you on August 16th.

The Coffee County Middle School volleyball team visited Tullahoma on Thursday for a good old-fashioned rivalry game.  In a match you heard here on Thunder Radio, the Lady Raiders rallied to capture a 3 set win.  Coffee Middle won by set scores of 12-25, 25-20 and 15-6 to improve to 2 and 0 on the season.

Coffee County got off to a rocky start as Tullahoma rolled off 9 straight points to break open a close first set.  The Lady Raiders went from trailing 9 to 7 to falling behind 18 to 7 giving Tullahoma a stranglehold on the first set.  In the 2nd set, Coffee Middle rallied from a 19 to 17 deficit to score 8 of the last 9 points and force a decisive 3rd set.  Tullahoma took an early 3 to 0 lead in the 3rd set before Coffee County got 6 straight points to take the lead.  After Tullahoma tied the score at 6, Coffee County scored 9 straight points to capture the rivalry win.   The Lady Raiders got strong service games in their 2 set wins.  Savannah Cooper ripped a pair of aces in the final points of the 2nd set and Katie Lawrence served 3 aces in the final 4 points of the 3rd set to claim the match win.

The Lady Raiders are back in action on Monday when they host conference foe Harris.  Monday’s match will be the home opener for the Lady Raiders.  First serve is scheduled for 5 PM.

The Westwood Lady Rockets returned very little experience in 2019 and a new head coach in Kendra Baxter.  The highlight of the season came with a doubleheader sweep of North Franklin.  Thunder Radio reported on the win in a story we published on September 6th.

The Westwood volleyball team welcomed North Franklin to the Joel Vinson Gym on Thursday.  Hosting the visiting Lady Gators in a doubleheader, Westwood looked to continue to show improvement.  The Lady Rockets did exactly that and gave head coach Kinda Baxter her 1st(and 2nd) career wins in the process as they swept North Franklin.

In the JV match, Maggie Brei and Soraida Barrera led the team in aces with 3 apiece.  Barrera, Haley Brown and Ziya Dillard all finished with kills and Maddy Carter was the team leader in assists.

The Lady Rockets will be back at home on Monday night as they play host to South Franklin.  Opening serve is set for 4:30 PM.