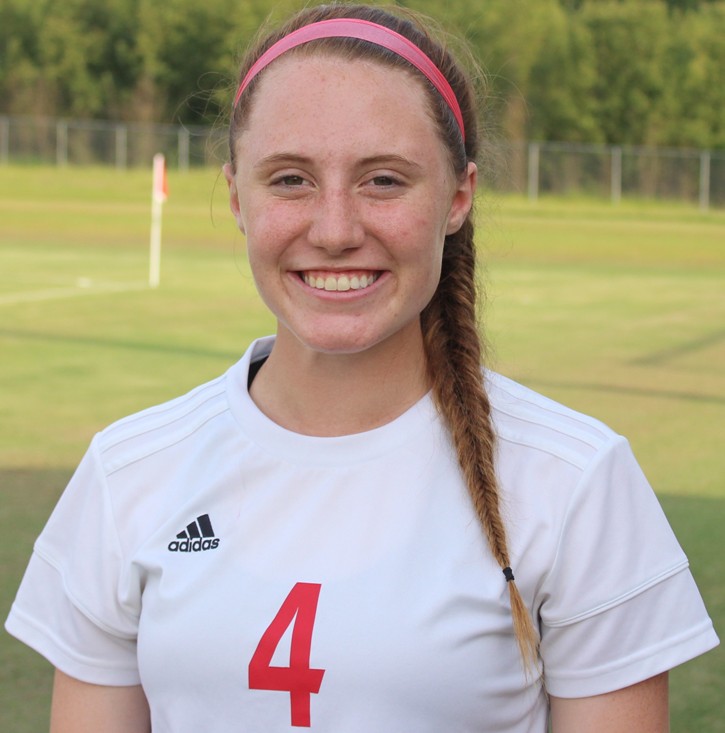 CHS first year head coach Lee Xixis mixed a balance of youth and experience to take his Coffee County Lady Raider to a regular season district championship and a region tournament berth.  The Lady Raiders beat Shelbyville in a dramatic 2 to 1 decision on September 24th to capture the regular season district crown.  Thunder Radio had the broadcast of the win as part of the Hometown Sports Series and brought you the news of the win in the following story:

The Coffee County CHS soccer team welcomed Shelbyville to the Raider Soccer Field on Tuesday.  The contest was the final district match of the year and you heard here on Thunder Radio.  In another physical contest, the Lady Raiders played tremendous defense and got a great performance in goal from Alanna Coker as they gutted out a 2 to 1 win.

Shelbyville got on the board first in the 25th minute when they converted a goal in the 25th minute off a long through pass.  Coffee County answered back 2 minutes later as Katie Cotton dribbled into the left side of box and drilled a shot past the Eaglette keeper to level the match at 1 heading into the half.

In a contentious 2nd half that saw 3 yellow cards on the teams and a red card on Shelbyville, Coffee County got the game winner on a pair of great individual efforts.  Reagan Ellison pushed up from her defensive position and lobbed a pass over the Shelbyville defense to Jenna Garretson in the 56th minute.  Garretson calmly lifted a shot over the charging Eaglette keeper for the match winner.  Coker finished with 4 saves, including a spectacular save on a breakaway in the 2nd half.  In addition to her point, Ellison marked both explosive Shelbyville forwards throughout the game.

The win gives the Lady Raiders the regular season district title as they improved to 6-0-2 in district play and 10-1-2 overall.  The Lady Raiders will be the top seed in the District 8AAA tournament and have guaranteed themselves a bid in the Region 4AAA Tournament.

A young and inexperienced Westwood soccer team struggled through growing pains in 2019.  The Lady Rockets played their best defensive game of the year in September when they traveled to Shelbyville to take on Liberty.  Thunder Radio brought you the recap of their tie with the Lady Patriots in a story we published on September 11th.

Hitting the road for the first time this season, the Westwood soccer traveled to Shelbyville on Tuesday to visit Liberty.  Showing improvement in each successive match, the Lady Rockets settled for a draw in a match shortened due to severe weather.

Both Liberty and Westwood scored 1st half goals before the game was ended early due to weather in the area.  Leonor Rivera had Westwood’s goal.

Westwood will return to Bedford County on Thursday as they visit Unionville to take on Community.  That match will kick off at 4 PM.

Coffee County Middle School also saw a new head coach take over the reins of the program as Tiffany McCormick was elevated to the head coach position.  Still lacking in experience, the Lady Raiders showed improvement throughout the year.   The Lady Raiders beat White County in a dominating 5 to 0 decision on August 29th to grab their first home win of the season.  Thunder Radio had the broadcast of the win as part of the Hometown Sports Series and brought you the news of the win in the following story:

The Coffee County Middle School soccer team welcomed White County to their home pitch on Thursday.  In a match you heard here on Thunder Radio as part of the 1st National Bank Hometown Sports Series, the Lady Raiders dominated every aspect of the game.  Four goals in the 1st half helped Coffee Middle roll to the 5 to 0 win.

Coffee County outshot White County 21 to 1 and had 11 corner kicks to none for the Warriorettes.  Coffee County got on the board in the 7th minute on a goal from Lindsey Grimes off a pass from Andrea Lopez.  4 minutes later, Grimes found Lopez with a pass to make the score 2 nil.  Emily Pickell added a goal in the 14th minute and Tia Buchanan scored in the 21st minute as Jasmine Norris had assists on both goals.  Lopez redirected a deflection of her first shot in the 36th minute for the unassisted goal to close out the scoring early in the 2nd half. Sydney Gilley and Lola George combined in goal for the clean sheet.

The Lady Raiders are back in action on Thursday when they welcome Tullahoma to the CCMS field.  Thunder Radio will be on hand to bring you that broadcast as well as part of the 1st National Bank Hometown Sports Series.  Opening kick is set for 5 PM, we will begin our live coverage at 4:50 PM.