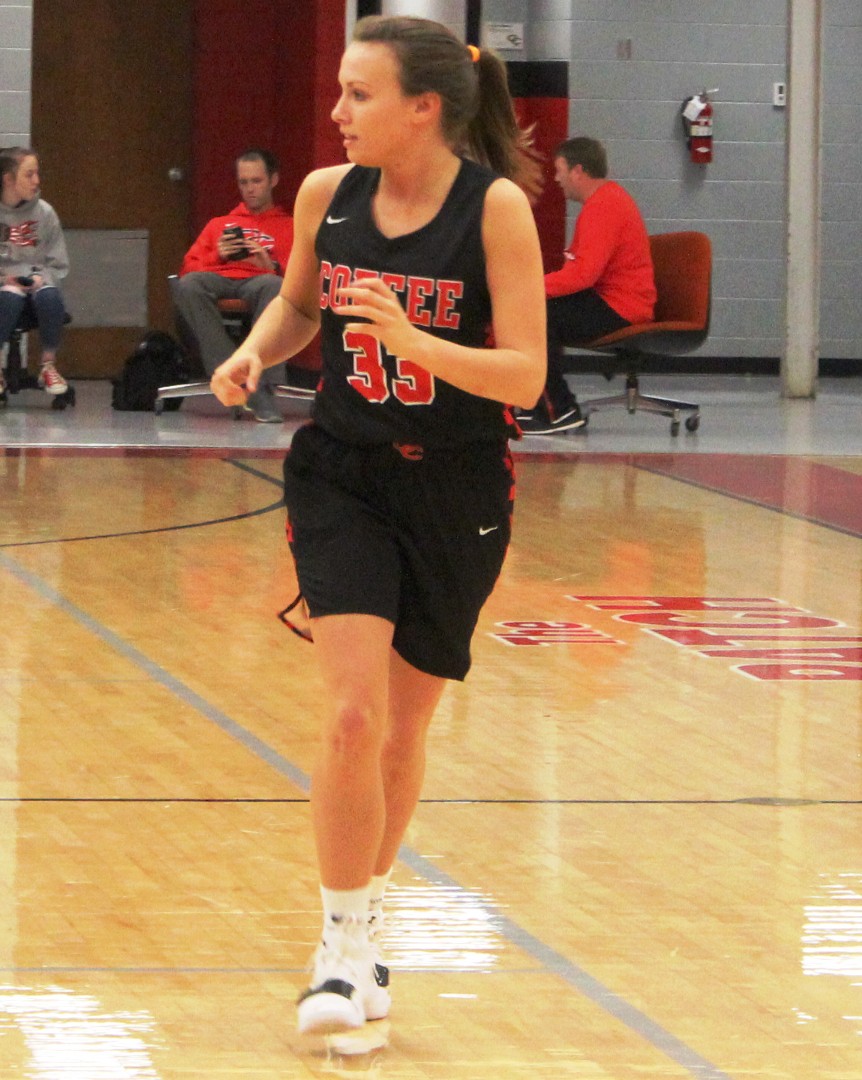 The Coffee County CHS basketball team advanced to the 2nd round of the region tournament with an overtime win over Stewarts Creek in February.  Thunder Radio was on hand to bring you the broadcast and reported on the win in a story we published on February 26th.

Hosting a region quarterfinal basketball game for the 2nd consecutive season, the Lady Raider of CHS welcomed Stewarts Creek to the Joe Frank Patch Memorial Gym on Monday.   Looking for their first region win since 2012, Coffee County saw Stewarts Creek rally in the 4th quarter to force overtime.  The Lady Raiders needed a come from behind rally in overtime to get the 59 to 55 win.

After a back and forth first half, Coffee County outscored The Red Hawks 8 to 4 in the final 3 minutes of the first half to take a 6 point lead into the half.  The Lady Raiders stayed hot as they pushed the lead to 14 points in the 3rd quarter behind 4 baskets from behind the 3 point line.  Stewarts Creek opened the 4th quarter on a 10 to 2 run to cut the deficit to 2 with 4 minutes left.  Coffee County built the lead to 7 only to see Stewarts Creek take the lead at 51 to 50 with 1 minute remaining.  Abby Morgan hit a free throw in the final minute and the Coffee County defense made a huge stop in the finals 15 seconds to send the game to an extra period.  In overtime, Morgan scored 6 points to give Coffee County the huge win as Coffee County remained unbeaten at home on the year.

Morgan led all scorers as she finished with 25 points, including 13 in the 4th quarter and overtime.  For her heroics, Morgan was named the Crazy Daisies player of the game.  Bella Vinson had 13 points including 2 big free throws in overtime.  Jacey Vaughn and Ellie Graham each played spectacular on the night and each finished with 8 points.  The win improves the Lady Raiders to 28 and 4 on the season.

The Lady Raiders will be back in action on Tuesday night at Riverdale as they take on the number 1 team in the state, Riverdale, in the semifinals.  Tip-off is set for 6 PM.  That game will be broadcast by our partner station WGNS of Murfreesboro.  You can listen to WGNS online at www.WGNSRadio.com.

The Coffee County Middle School Lady Raider basketball team qualified for the sectional tournament and got a first round win over Oakland.  Thunder Radio brought you the story of the win in a story we brought to you on January 29th.

The Coffee County Middle School Lady Raider basketball team opened play in the TMSAA Section 2 tournament on Monday night at Stewarts Creek.  Hoping to advance to the inaugural TMSAA State Tournament in February, the Lady Raiders squared off against Oakland Middle School.  A huge 4th quarter rally lifted Coffee Middle to a 32 to 26 win and a berth in the Sectional semifinals.

The win advances the Lady Raiders to Wednesday night’s semifinals where they will take on White County.  Tip-off is set for 4:30 PM at Stewarts Creek Middle School.

The Westwood Lady Rocket basketball team rides a perfect 12 and 0 record into 2020.  The Lady Rockets got the year started off with a bang with a championship in the Morrison Ruritan Preseason Tournament.   Thunder Radio brought you the recap of the championship  game win in a story we published on October 28th.

The Westwood basketball teams traveled to Morrison on Friday night for the final night of the Morrison Ruritan Preseason Tournament.  The Lady Rockets continued their tournament dominance with a 36 to 18 win over Morrison.

In the girls’ game, the Lady Rockets held Morrison to 5 first half points with their man to man defense allowing them to build an 18 point halftime lead.  Westwood stretched that lead to 24 points going into the 4th quarter as they rolled to the championship win.  Bryleigh Gray had four 3 point baskets to lead the Lady Rockets in scoring as she finished with 12 points.  Keena Seivers added 8 points while Leonor Moreno netted 7 points for Westwood. Gray, Moreno and Princess Penaloza were all named to the All-Tournament team from Westwood.   Keena Seivers was selected as the tournament Most Valuable Player.