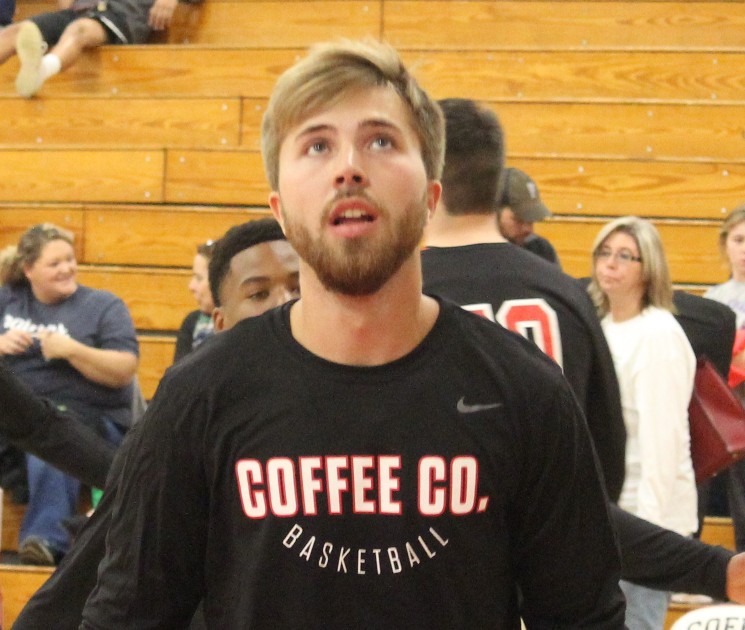 As 2019 has come to a close, Thunder Radio Sports looks back at some of the highlights of the calendar year for each of the more than 40 prep teams we follow and report on.  Today we look back at some of the highlights of year for the boys’ basketball teams at Coffee County CHS and Coffee County Middle, Westwood Middle and Temple Baptist Christian schools.

The Coffee County CHS basketball team earned a region berth in 2019 and hosted a region tournament game for the first time since 2006.  The Red Raiders advanced to the district tournament finals with a hard fought win over Lawrence County.  Thunder Radio was on hand to bring you the broadcast and reported on the win in a story we published on February 16th.

Trying to get their 3rd win of the season over Lawrence County, the Coffee County Red Raiders squared off against the Wildcats on their home floor on Friday night.  With a home region tournament game as the reward to the winner, the 2 teams battled from the tip-off to the final horn in the District 8AAA tournament semifinals.  In the end, Coffee County rose to the occasion in the 4th quarter to get the 50 to 44 win and advance to Saturday’s District championship game.

After ending the 1st quarter tied at 8, the Red Raiders nudged ahead by 3 points at the half and stretched that lead to 7 points heading to the 4th quarter.  Lawrence County responded to close the gap to 2 points with 5 minutes left in the game on a pair of 3 pointers.  From that point, Coffee County was able to knock down just enough field goals and free throws to hold off the upset-minded Wildcats.

Darius Rozier was the leading scorer for Coffee County as he finished with 14 points, including 5 clutch free throws in the 2nd half.  Kyle Farless added 12 points, with 8 of those points coming in the second half.  Chase Simpkins and Harley Hinshaw each added 8 points with Simpkins getting 6 second half points and Hinshaw netting 5.  For their efforts, Rozier, Farless, Simpkins and Hinshaw were named the Crazy Daisies co-players of the game.   The win improves Coffee County to 19 and 5 on the season and guarantees them a home game in the first round of the region tournament next week.

The Red Raiders will advance to Saturday’s championship game where they will take on Columbia.  Tip-off is set for 7:00 PM at Lawrence County High School.  Thunder Radio will bring you the broadcast beginning with the Char-El Apartments and Home Rental pregame show at 6:50.

The Lady Raiders will also play in Saturday’s girls’ championship game where they will take on Tullahoma.  Tip-off is set for 3:30 PM at Lawrence County High School.  Thunder Radio will bring you all the action beginning with the Powers Storage pregame show at 3:20.

The Coffee County Middle School boys’ basketball team enters 2020 on a 7 game winning streak and has won 9 of their last 10 games.  One of the highlights of the impressive start was a road win for the Red Raiders at White County.  Thunder Radio brought you the story of the win in a story we brought to you on November 15th.

The Coffee County Middle School basketball teams traveled to Sparta on Thursday night for a conference doubleheader with White County.  The Lady Raiders fell behind early as they fell 37 to 30.  The Red Raiders shut down the Warriors in the 4th quarter to grab a 31 to 25 win.

In the boys game, the Red Raiders trailed by 1 at the half before pulling ahead in the 3rd quarter before holding White County to a single free throw in the final 6 minutes.  The Red Raiders showed off their balanced scoring attack as Jackson Shemwell, Ethan Hargrove and Brendan Sheppard each netted 8 points.  Evan Kirby tacked on 4 points for Coffee Middle.

The Raiders and Lady Raiders return home on Monday night as they welcome West Tullahoma to the CCMS gym.  Thunder Radio will be on hand to bring you all the action as part of the 1st National Bank Hometown Sports Series.  The pregame show begins at 5:50, tip-off is set for 6:00.

The Westwood Rocket basketball team is also in the midst of a winning streak.  The Rockets are 8 and 1 in conference play and opened the season with a 3rd place finish in the preseason tournament.  Thunder Radio brought you the recap of the consolation game win in a story we published on October 28th.

The Westwood basketball teams traveled to Morrison on Friday night for the final night of the Morrison Ruritan Preseason Tournament.  The Rockets shook off their jitters from Thursday night to get a 37 to 18 win over Dibrell in the tournament’s consolation game.

In the boys game, the Rockets held Dibrell scoreless in the 3rd quarter to push a 9 point halftime lead to 17 points entering the 4th quarter.  Jayden Carter led Westwood in scoring as he finished with 12 points.  Jaiden Warren added 10 points and Caiden Warren netted 9 points.  Caiden Warren and Jayden Carter were named to the All-Tournament Team.

The Temple Baptist Christian School basketball team saw the graduation of their all-time leading scorer in 2019 in Cody Swayze.  Swayze helped lead the Eagles to a 2nd place finish in their season-ending tournament.  Thunder Radio brought you the recap in a story we published on February 18th.

The Eagles of Temple Baptist Christian School closed out their season in Saturday at home in their very own Eagle Invitational.  Temple finished the tournament with a record 4 and 2 with both losses coming at the hands of tournament champion Victory Baptist Academy of Shelbyville.

The Eagles went 3 and 1 in pool play as they opened play on Friday with a 49 to 34 win over Faith Christian of Jamestown.  Cody Swayze led the Eagles in scoring with 32 points as Alex Gloden added 11.  . They followed up with a loss to Victory 60 to 45.  Swayze scored 29 in the loss while Gloden once again scored 11.  The Eagles closed out Friday with a 46 to 32 win over Philadelphia Christian.  Swayze scored 32 points in the win while Gloden finished with 10 points.

On Saturday, Temple opened with a 44 to 30 win over Dogwood Christian to advance to the title game.  Swayze paced the Eagles in scoring with 27 points while Mich Gloden added 9.  In the title game with Victory, foul trouble prevented the Eagles from the revenge win.  Victory pulled away late in a 76 to 53 win.  Swayze poured in 37 points while Mich Gloden added 8.

The Eagles ended the season with a record of 11 and 8.  Senior Cody Swayze ends his career as Temple’s all-time leading scorer as he finished his career with 2,197 points for his JV(middle school) and varsity(high school) career.