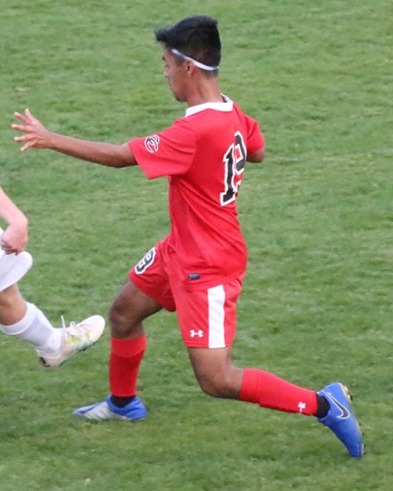 The highlight of the year was the strong close to the season for the Coffee County CHS soccer team as they won 4 of their last 5 games and advanced to the finals of the District 8AAA tournament.  An exciting semifinal win in Columbia gave the Raiders the berth in the finals and Thunder Radio reported on that win in a story brought to you on May 8th.

John Martinez converted a pass from Briggs Haithcock for the game winner in the 99th minute.  Coffee County missed out on an excellent scoring chance in the first half but the impressive play of Raider keeper Kix Ferrell send the game to the half scoreless.  In the 2nd half and extra time, Ferrell turned away countless shots from a tenacious Columbia offense to capture the clean sheet and the praise of Raider coach Robert Harper.  “I can’t count how many incredible saves he had.  Probably the best game ever by a Coffee County keeper” said Harper.

The Red Raiders will ride a 4 game win streak into Thursday’s district finals at Shelbyville.  That match will get underway at 6:30 PM at Shelbyville Central High School.  A win on Thursday will give the Red Raiders a berth in the Region 4-AAA tournament next week.

The Coffee County Middle School soccer team continued their improvement from 2018 as they advanced to the conference finals on April 27th.  The Red Raiders got a 3 to 2 win over Tullahoma in semifinals.  Thunder Radio reported on the win with the following story we brought to you on April 29th.

The Coffee County Middle School soccer team capped off their most successful season of the decade.  Coffee County advanced to the CTC tournament finals with a 3 to 2 win over Tullahoma on Saturday afternoon.  In the finals the Red Raiders were stopped by Harris 3 to 0.

Against Tullahoma, Javier Rodriquez got Coffee Middle on the board in the 1st half to make the score 1 nil at the half.  In the second half, Julius Norris potted a pair of goals to build the Raider lead to 3 nil.  Tullahoma scrapped their way back into the match with a pair of goals late but could not catch up to Coffee County.   The win avenged a 6 to 2 regular season loss to Tullahoma.

In the finals, Coffee County took on a Harris team that blitzed through the conference all season long including an 8 to 0 win in Shelbyville.   Coffee County played exceptionally well but fell 3 to 0.  After the match, Coffee County’s Peyton Pobanz, Isaiah Campbell and Javier Rodriquez were named to the all-conference team.

The Westwood Middle School soccer team came up short in their chance to claim their 5th straight conference title.  The Rockets season came to a close in a semifinal match at Dyer-Bouldin Field.  Thunder Radio brought you the recap in a story we brought to you on April 18th.

The Westwood soccer team closed out their regular season on Wednesday night at Dyer-Bouldin Field.  Hosting conference rival Cascade, the Rockets had a huge 2nd half as they rolled to a 4 to 0 win.

Westwood got on the board late in the first half as Cascade punched a ball past their own keeper for an own goal.  In the second half, Westwood got a pair of goals from Caleb Cargile and a goal from David Dolack.

The Rockets return to the pitch on Friday, April 26th when they host the Central Tennessee Soccer Conference postseason tournament.  Westwood, with their first place conference finish, has secured the number 1 seed and will host a semifinal game on Friday.  The CTSC final will be held on Saturday, April 27th at Dyer-Bouldin Field.